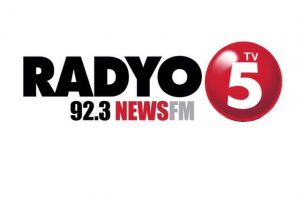 Radyo5 92.3 News FM established in 1973 as MRS is a news, Public Affairs and talk radio operating in Mega Manila market. Owned by Nation Broadcasting Corporation which in turn is a controlled by PLDT Beneficial Trust Frund’s broadcasting division MediaQuest Holdings. The branding News5 is in line TV5’s news department. TV5 was purchased by MediaQuest Holdings from Cojuangcos and Media Prima in 2010. Legally known as DWFM-FM, Radyo5 92.3 made into airs as Nation Broadcasting Corporation’s first radio. MRS 92.3 (Radyo5 Now) hosted easy listening and AC formats. DXFM at Davao and DYNC at Cebu were the brands that copied the success story of MRS in the next years as they closely followed the prime of DWFM (Radyo5 92.3) which was leading Manila market as #1. Under NBC, it was headquartered at Jacinta Building 1 at Pasay Road but relocated the facility to Jacinta Building 2 in EDSA, Guadalupe, Makati City. National Broadcasting Corporation became a part of MediaQuest Holdings Inc. in Sep 1998 and formats and brandings were changed to Smooth Jazz and Joey@Rhythms in Nov 1998. 923 Joey was shortened version adopted in Aug 2005.

Jazz fusion, crossover sound, European Jazz and Pop Jazz would make it to the studio rooms after Francis Lumen joined Radyo5 92.3. During that time call letters were changed to DZRU-FM. The old calls: DWFM returned after the new management overtook the Joey. On April 8, 2007 former DZRU was branded as 92.3 xFM to play trip hop, downtempo, indie pop and house. Smooth Jazz once again entered the party in Feb 2008 with the mix of R&B, pop and contemporary hits. Format was flipped to CHR on Oct 1, 2009 and Radyo5 92.3 FM was rebranded as U92. Studios were shifted to Silver City Mall in Pasig City. The final renaming took place on Nov 8, 2010 as Radyo5 92.3 News FM with once again a format-flip which was then (and currently) all-news. Studios this time were shifted to TV5 Studio Complex in Novaliches, Quezon City. The Move was intended to increase the news operations of TV5 and create a strong presence among competitors. Radyo5 became the 4th most listened station in Metro Manila in a just a small period of time. Studios were shifted to TV5 Media Center in Reliance, Mandaluyong in Dec 2013. Radyo5 92.3 News FM terminated its 24×7 regimen owing to the frequency financial cuts by the management thus reducing the weekday schedules. Listeners can have the authentic and latest national, international, sports, weather, business, world, entertainment, lifestyle, Motoring and tech news online on the official site of Radyo5 gathered and classified by the committed staff and reporters with dedication second to none. Follow Radyo5 92.3 on Facebook, YouTube and Twitter. Here is the website: www.interaksyon.com