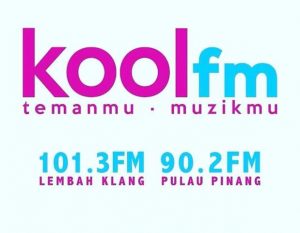 Kool FM launched on March 1, 2016 in Petaling Jaya is a Malay Language station in the ownership of Media Prima Berhad. Temanmu · Muzikmu meaning Your Friend, Your Music is the catchphrase of the channel.

Kool FM intended to serve the Generation X audiences had a great number of songs from 90’s, 80s and beyond. However, the music produced in and after early 2000s and contemporary hits of the day are also available for the listeners. The siblings of the station include Hot FM, One FM and Fly FM. Fans can have Kool FM in Lembah Klang Valley, Kuala Terengganu and Pulau Pinang Island on 101.3, 93.6 and 90.2 FM respectively. Fans can have Dengar Online, Peraduan, (Contest), Hiburan, (entertainment) Sahabat Kool, Hot Kool Mash Up, Playlist, Galeri, Videos, Super Karoks, Dramatik Cool, Hot Kool Jam and more.

Listen live internet radio Kool FM on frekuensi of 101.3 in Malaysia. Wait as the stream gets loaded in the player.