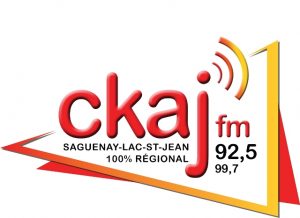 CKAJ 92,5 FM is a Saguenay based Oldies format Francophone radio owned by La Radio Communautaire du Saguenay. CKAJ 92.5 is the regional retro station par excellence in Saguenay-Lac-Saint-Jean offering you a diversified music program, while making sure to bring regional news to the community. Always on the lookout, the dynamic and passionate team offers content tailored to the tastes of listeners, both on airwaves and on the website.

Full List of Canadian and Quebec FM, AM and Online Stations

Licensee (Radio Communutaire de Jonquiere Inc.) seeking 93.7 MHz was approved by CRTC in 1976 to get 92.5 MHz and a 423-watt transmitter. The channel signed on air on April 11, 1977 as CHOC-FM. Power and transmitter site were allowed to relocated in 1981; 3,000 was the new ERP. Owing to difficulties faced in complying with the commitments made with CRTC, a short renewal was offered by the commission in 1986 and 1988 for two years. CEGP was involved in the programming of administration of community radio after a two year renewal in 1992. ERP was decreased to 2,693 w in Dec 1994. News calls adopted in 1997 were CKAJ-FM. A repeater at Saguenay (La Baie) was approved for launch in Oct 2006. 100% regional is the catchphrase of the channel.

CKAJ 92,5 aims to be a people-friendly station with a mission to provide information and entertainment adapted to the needs of its clientele. The mission of CKAJ 92.5 is to offer the people of Saguenay Lac-Saint-Jean a quality and diversified programming, but also to contribute to the success of the artists of the region by making them known and offering a place of choice on the airwaves. CKAJ 92.5 aims to listen to people in order to provide them with information, musical entertainment and sports programs. Franco-Quebec audiences can listen the CKAJ-FM 92,5 online and follow the oldies radio on Facebook and Twitter. Enjoy Station régionale rétro, Chanson française, Musique Country. Here is the website: www.ckaj.org