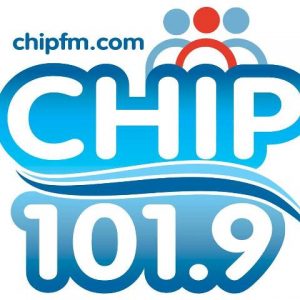 CHIP 101.9 FM (Previously on 101.7 FM) established in June 1981 is a Fort-Coulonge is a bilingual (English & French) radio owned and operated by La Radio du Pontiac Inc. Diane Grenier is the president of the company. The license was awarded by CRTC on March 20, 1980; it would operate on a frequency of 101.7 MHz using an ERP of 3,000 w with repeaters initially at Chapeau and Rapide-des-Joachims. 2/3rd of the programming proposed was in French and English would take 1/3rd. Agreeing to the demands of CBC the applications made by La Radio du Pontiac were on hold as CBC needed time complete its surveying on the allocation of frequencies. The permissions were given by Commission in June 1981 making the FM hit the waves on 101.5 MHz finally, however, the station was originally launched on March 1, 1981 after the foundation of a non-profit organization in June 1978. CHIP due to non-compliance with commitments made to CRTC was given only a one year renewal in 1987 and was recognized as experimental station.

It was evident as the Rapide-des-Joachims satellite was never implemented. The Canadian commission allowed La Radio du Pontiac to move CHIP to 101.7 MHz and increment the ERP to 11,900 w in Jan 1993. The recent increase in wattage and switching of frequency brought an end to the Chapeau rebroadcaster. Local programming hours were increased to 126/week and the radio was no longer borrowing content from CIMF. CRTC approved the applicant’s demand to increase the English language program share to 40% to meet the needs of Anglophone listeners in area and decreasing French content from 70 to 60 percent each week. CRTC renewed the license of the CHIP 101.9 FM on Aug 13, 2007 for a seven year term until Aug 31, 2014. CHIP swapped its frequency with Torres Media Ottawa’s CIDG-FM on Aug 30, 2016 moving to 101.9 MHz. CHIP-FM aims to contribute to the growth and development of cultural, artistic and economic aspects of Pontiac community. Audiences can listen the multicultural radio online through its multilingual web-portal with schedule, Memberships, community events, Flea Market, audios, pictures, contests and Signup opportunity to join the CHIP 101.9 FM. Follow the Pontiac community radio CHIP 101.9 FM on Facebook and Twitter. Here is the website: www.chipfm.com