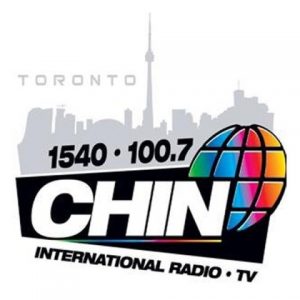 CHIN Radio also known as CHIN-AM is a Toronto based multilingual radio owned by CHIN Radio/TV International). The Class B channel was launched on June 6, 1966 on a frequency of 1540 kHz using an ERP of 50,000 w. Johnny B. Lombardi who acquired Radio 1540 Ltd. from Ted Rogers used the existing CHFI 1540 transmitter site located at Eglinton Avenue, Peel County. Lombardi had plans to set up the station in June 1965 but couldn’t make it until the summers of 1966. It was licensed as cosmopolitan radio that would air 15% of its content in languages other than French and English. Ethnic content got increased to 20% in 1968 after the approval of BBG.

Listen CHIN 1540 AM online from Toronto Ontario. Wait as the stream loads.

The station was broadcasting news, weather & sports updates and half-hour Italian news bulletins. By the year 1970 it was broadcasting in 25 languages. In the same year Johnny Lombardi acquired his partners share. CHIN was broadcasting 24 hours stereo format. It became clear-channel following an agreement between US and Canada in 1984. And would now be able to broadcast 24 hours. Approval was given for 24-hour broadcast in June 1985. Expansion was allowed in programming which would be 84 hours/week now and out of which 44 would be dedicated to Chinese, 19 for Italian and 17 for Greek. High nighttime wattage of 15,000 w (implemented in 1988) was also awarded to the radio after some tiring negotiation with United States. Ethnic content was increased to 95.2% in 1986. Wattage for nighttime was increased to 30,000 w in 1990. CRTC renewed the license of the statin on March 28, 2013 until Aug 31, 2019. You can listen the CHIN serving over 20 communities and cultures online. Follow the International radio on Facebook and Twitter. Here is the website: wwww.chinradio.com