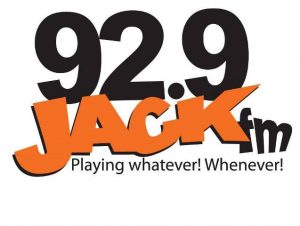 92.9 Jack FM launched in December 1962 is a Dartmouth based Adult Contemporary Hit station located in Halifax Regional Municipality and owned by Rogers Media. Playing whatever! Whenever! is the slogan of the 92.9 Jack FM (legally known as CFLT-FM) Initially launched as CFDR-AM on December 5, 1962 by Robert L. Stanfield on 790 KHz with an ERP of 5,000 watts; Jack 92.9 was originally owned by Radio Dartmouth Ltd. and broadcasted quality music, local news and sports programing. In 1968 CJCH and CFDR run into an agreement that would benefit the companies winning more advertisers. CFDR subscribed to the Broadcast News in 1969. After the shifting of studios in March 1971 the frequency of the station was changed from 790 to 680 KHz in 1978. Newfoundland Capital Corp. Ltd purchased the AM and FM stations, CFDR and CFRQ respectively in 1987 from C. A. Patterson after the approval of CRTC on June 10, 1987. The changes such as news budget, format change from easy listening to contemporary music and a couple other on administrative positions were also due to entirely change the 92.9 Jack FM in 1987.

The effective radiated power for nighttime and frequency were once again approved to flip to 15,000 watts and 780 kHz in 1989; this was eventually implemented in 1991. KIX Country was the brand name of the station in 1993. In December 2001 after acquiring 50% of CIEZ-FM alongside CHUM, a partner to other 50%, the Local Management Agreement (LMA) brokered between the parties was terminated. The frequency was switched from 780 kHz to 88.9 MHz and average wattage was incremented to 21,000 watts in April 2007. The assets exchange between Rogers Broadcasting Limited and Newcap Inc. was approved by CRTC on November 24, 2008 after which CIGM Sudbury will be a part of Newcap and CFDR would be taken by Rogers Broadcasting. The ownership change would also mark the change of dial, frequency and effective radiated power to FM, 92.9 MHz and 63,000 w respectively. After a couple of signal tests in July 2009 CFLT branded as Lite 92.9 was officially launched on August 9, 2009; the channel (later 92.9 FM) would be a home to non-stop Rock hits. CRTC validated the license of the Jack 929 FM on August 28, 2012 until August 31, 2019. Light Rock was reemerged as 92.9 Jack with Hot AC and CHR format on February 28, 2014 after the approval of CRTC. Have the hit listening online with latest, on demand, contests (Win a trip to Sandals Whitehouse European Village & Spa in Jamaica!, No time to Google, Win with Mr. Lube, Win a pair of Nordic Walking Poles!, Get Lucky and Score with Jack!), events (The Lung Association’s Quit Cold Turkey Event, Sackville’s Christmas Tree Lighting,Blue Rodeo @ Scotiabank Centre) and more. You can follow the 92.9 Jack FM on Facebook, Twitter, and Instagram. Here is the website: www.929jackfm.ca