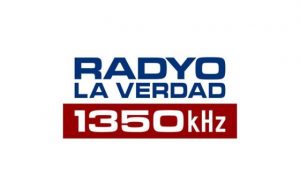 Radyo La Verdad 1350 AM is a news and public service channel lying in Quezon City and has its broadcast spread to Mega Manila area. Dr. Daniel Razon is the Chairman and CEO of Breakthrough and Milestones Productions International (BMPI-UNTV). Currently owned by Progressive Broadcasting Corporation the station was originally launched in 1972 as DZXQ by Mabuhay Broadcasting Systems Inc. The channel made its debut as a fully functioning radio with blocktimers allowed at its threshold except on Sundays. The station was first to air Chinese content. Music would take the place in the absence of blocktimers. The brand was decorated with some of the biggest names in the broadcasting including Jino Parrucho, Nar Pineda, Narissa Gonzalez, Popo Villanueva, Dr. Erick San Juan, Roger Arienda and others. An Affair with Baby Tisina was the popular show hosted at the station. The DZXQ-AM was turned off on Feb 28, 2011 but returned to the airs after a couple of investors showed their interest in the radio. In Nov 2011 the Radyo La Verdad 1350 AM began to rebroadcast UNTV’s feed and also changed its calls to DWUN. Broadcast were up to 24×7. The formal opening of the radio as UNTV’s AM radio arm was made on Jan 16, 2012. Reforms include UNTV mobile app for android and iPhone launched in April 2013. A lot of changes were made including the construction of a new transmitter house and the change of radio booth and control room.

Full List of Philippines FM, AM and Online Radios for Listeners

More About Radyo La Verdad 1350 AM

Recent development uncovered a 50-kW transmitter that would replace a four decade old transmitter. The transmitter was put into tests on Dec 6, 2016 and was expected to become operational with full power by the start of next year (2017). A number of new stations were in pipeline to widen reach to other provinces. The radio was rebranded as Radyo La Verdad 1350 on Feb 13, 2017. New catchphrase was Totoong Balita, Tunay na Kalinga para sa Kapwa. You can listen the Radyo La Verdad 1350 AM online with public service announcements, news, talk, religious and entertainment programs. You can follow the Radyo La Verdad 1350 AM on Facebook, Google+ and Twitter. Here is the website: www.radyolaverdad.com/