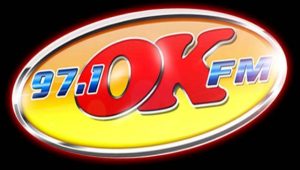 97.1 OKFM also remembered as DWGB-FM is a Legazpi City is a Top 40/Contemporary Hit Radio owned by PBN Broadcasting Network. With six months of transmissions, the channel became the most listened radio in the area. This was however, just a beginning which later inspired a lot of success and chain of radios in Metro Manila and other areas. Gates were open for Naga City facility in 1995. Pop music station is unstoppable since its launch in 1987 and has celebrated its 25th anniversary in 2017. Max and avg. ERPs are 5,000 w and 11,000 w respectively. You can listen OKFM online with news from Global Bicolano Network, music, Bicol and more. Follow 97.1 OKFM Legazpi (DWGB-FM) on Facebook, Twitter, Instagram and Goolge+. Here is the website: www.pbnbicol.com