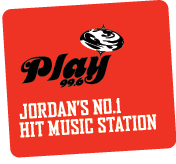 Play 99.6 is one of the Jordan’s most popular radio based in the City of Amman, Jordan having more than 0.1 million fans on Facebook.  A music genre radio station established by two  entrepreneurs Ramzi Halabi and Zafer Younis and launched  in October 2004. Primary languages are English and Arabic. The station is owned under the Modern Media Company that also owns other radio stations of Jordan like Sunny FM. The slogan is “Jordan’s No. 1 Hit Music Station”. The channel plays English & Western Music from all over the world. Most of the 15-30 age limit used to listen this hit station. A winner of international recognition (NAB International Broadcasting Excellence Award) by the National Association of Broadcasters. www.play.jo official website

Here you can listen online Play 99.6 by waiting a few seconds, the stream will be start automatically.