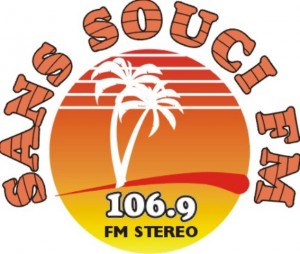 Sans Souci FM 106.9 Cap-Haitien was conceived in 1991 under the name Radio Konbit as part of a process to national integration through decentralization. The project aimed to break the isolation of provinces facing the centralization of all decisions, activities and even information from the capital. The province should have its own voice. The implementation process was interrupted in September 1991 and resumed in January 1998 under the name of Sans Souci FM. The name and strategy have changed following the tragic assassination in August 1994 of one of the project sponsors. L’évasion totale is the slogan of the Cap-Haitien based station.

The audience targeted by the Sans 106.9 Cap-Haitien includes professionals, youth, students, workers, artists, employed, unemployed and all those who understand French and Creole. Sans Souci also provides NGOs and other organizations an effective platform to say what they want. Souci notably works in partnership with Radio Ibo, Signal FM in Port-au-Prince. Sans Souci FM has made music his main niche. It puts you in touch with the latest vibes of Haiti and Caribbean on the whole. According to its development plan, Sans Souci broadcasts its programs from Cap-Haitien to the five northern departments of Haiti. Departments North and Nord’Est are considered priority areas of coverage and those of Nord’Ouest, Artibonite and Central are considered secondary. The music is very varied and also takes into account regional differences. You can listen to the Sans Souci 106.9 FM online on the official website. AudioNow numbers can also be used to listen the Sans Souci FM 106.7 | 107.7. Here is the website: Sans Souci FM 106.9 Cap-Haitien