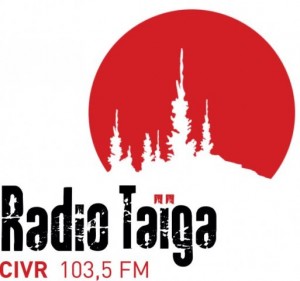 Radio Taïga 103.5 FM launched on September 14, 2001 also recognized by its call-sign CIVR-FM is a community channel representing Franco-Ténois community. L’alternative musicale! and Hear the difference! are the catch-phrases of the Taïga.  CIVR was approved by CRTC on April 28, 2000 considering the request made by L’Association franco-culturelle de Yellowknife. The license of the French-language community channel was issued to August 2016. Radio Taïga would operate at 93.3 MHz using an ERP of 164 watts. The weekly 126 on-air hours include 15 hours local content while the remaining share would come from Réseau Francophone D’Amérique, another dominant French radio network. CIVR switched its frequency from 93.3 to 103.5 MHz with the same FM band on April 5, 2001. After the 6 month extension period granted by CRTC the channel was once again live on September 14, 2001. Taïga renewed its license on June 5, 2006 for the next seven years until August 31, 2013. Société Radio Taïga’s bid to take hold of CIVR from L’Association Franco-Culturelle de Yellowknife wasapproved by CRTC on June 9, 2011.

More NT and Canadian FM and AM Stations

Through the continuous efforts of its founders and several others, Taïga was launched September 14, 2001 with the opening of its studio Michel Lefebvre in the Michel Lefebvre dans la Maison Laurent-Leroux in Yellowknife. For over 10 years, the francophone community radio NWT gives a sense of belonging to francophones of Yellowknife, while it is also a great tool for disseminating the NWT francophone vitality. From the beginning, the radio made its place in the daily lives of Yellowknifiens through the involvement of its volunteers and its leaders. Taïga is administered until 2011 by the l’Association franco-culturelle de Yellowknife. Over time, several members of the association devote much time to run their francophone station. As more directors succeed before that in 2007 in a wave of change, Radio Taïga emphasizes the communicative potential of radio and gains in structure by establishing its first morning show airing Monday through Friday from 7 am at 9 o’clock. By partnering with the French weekly newspaper l’aquilon, journalistic content is entering the northern waves allowing the station to make great strides towards entertaining content driven programing and powered by the music played and the delivered information listeners. The francophone station separates from the association Franco-culturelle de Yellowknife in 2011, became the Taïga and radio company decided to merge its new room with the newspaper l’aquilon. Since then, the two media provide a daily news content to Francos-NWT through its multi-platform journalists and volunteer leaders, some are involved since the early days of radio. Dedicated, this team allows Taïga broadcasting corporation to promote the Francophonie in the Northwest Territories as to implement the project to expand the waves of alternative music up in the other three major Franco-NWT communities: Hay River, Fort Smith and Inuvik. Bad French content on the radio in Yellowknife? Tune in to FM 103.5 in Yellowknife to hear the musical diversity of Radio Taïga ! Like Quebec music or prefer French music. You love funk, folk territories, or you just like to discover world music. Finally no matter your musical taste, Taïga is the musical alternative. Radio Taïga is also the voice of francophones in the capital of the Northwest Territories for over ten years!

At Radio Taïga , you have the right to speak:

Thanks to its journalists, its live interviews, reports, Taïga turns its microphone in your direction. In addition, the morning show good to wave is the ideal platform to transmit your opinions, share your musical discoveries and promote your artistic, community, school or sports. Want to find out what it really feels like to be behind the microphone? You have an idea of ​​issue to which you will enjoy participating? Join the dynamism of Radio Taïga, and become volunteers within your French radio. Whether the technical, research, animation, music choices or event organization. You can listen to the Taïga online through the official web-radio and find more on the site. Fans may also get social using Facebook and Twitter. Here is the website: Taïga 103.5 FM Yellowknife, NWT