Radio Valencia is the station Cadena SER has in the city of Valencia (Spain) and is also the regional head of all Valencia stations built in this string; it is headquartered in Calle Don Juan de Austria, 3.1The channel comes under Cadena Ser Radio and Prisa business group which owns Radiofórmula, Los 40 Principales, M80 Radio, Cadena Dial, Máxima FM and Ona FM in the region of Catalan. It is also the majority shareholder of Grupo Latino de Radio, which operates several stations in Latin America. With 1,235 stations between themselves and associates, and 28 million listeners, it is the largest radio group in Spanish-speaking markets. The national programs are made in the studios of Real Madrid except the programs La Ventana and Si amanece nos vamos. During the weekend several smaller programs are broadcast audience and with varying schedules such as Los toros, Ser digital, Ser consumidor, Ser aventureros, Milenio 3, Punto de fuga and Ser Historia. Toda la actualidad del deporte is an intergral part of the channel. Visitors can access the podcasts; Toda la actualidad del deporte; contact via telefono and follow the station on Youtube, Facebook, Twitter and Google+.  The FM and AM frequencies of station are 100.4 and 1179. Enjoy Cadena’s FM form the Valencia province live. You can find more about channel Cadena on: Cadenaser.com 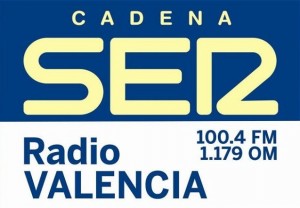