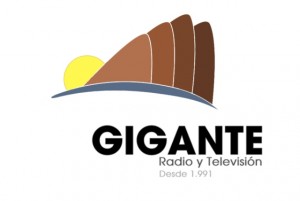 Radio Gigante 102.2 FM Tenerife, since its birth on November 5, 1991, has grown from a local station to what now is a commercial radio station. Gigante broadcasts from their own Radio & TV studios located on Calle La Sirena, Nº 14 en Puerto Santiago- Municipio de Santiago del Teide. News, regional stories, from Santa Cruz de Tenerife, Sports feeds, weather updates with the blend of music is what channel has for you. La Radio de tu Vida is the sloganof the station.  The channel broadcasts in stereo via frequency modulation of 102.2 for the island of Tenerife, La Palma, La Gomera and El Hierro Island. Gigante also has its Radio Data System (RDS) to supports it broadcasts. You can listen live to the station across the world through official website. Latin Jazz, Latin Pop, Salsa, Los 40 and other Latin genres and cultural activities are the components of the making of the daily programming.

Radio Gigante has an outdoor mobile unit connected with the central studios of the station. The 4 studios of the radio are active currently. Studio A is designed to perform interactive programs, debates, discussions, events and live broadcasts. The space of 5 guests and a moderator/speaker is available in the estudio. Gigante, working with various audio editing systems, records the programs like grabaciones en OFF, grabaciones de Cuñas in Etudio B. RED is used by the channel to make recordings of all kinds. Virtual studio is the last of fourth which studies the content and design for live broadcasts and where the monitoring of live programs is done. Listeners can listen to the 102.2 FM and watch Gigante TV through the webcast also. Downloading the official android app would be more than handy. You can also find the channel on different social media platforms including Facebook, Twitter, Youtube and also on the WordPress blog of the station. Here is the official website: Radio Gigante 102.2 FM Find out More Spanish Radio stations and FM’s