RAC 105 is a private radio station in Catalonia, Spain, which broadcasts a musical radio formula of AC type. RAC 105 was launched on December 23 of 1982 and belongs to the Cooperative Society Ràdio Associació de Catalunya , although initially the station RAC was operated by the Catalan public radio ( Catalunya Radio ) until in 1998 became part of the Grupo Godó – recently Grupo PRISA has purchased 18% of Grupo Godo. RAC 105 entre la música i tu is the slogan of the FM. 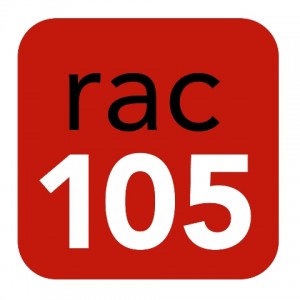 RAC 105 is an heir which was founded in 1929 by Eduard Rifà and Anglada and managed 15-Radio EAJ Asociació de Catalunya, which began broadcasting on April 19 of 1930. In July 1936, owing to the outbreak of the Spanish Civil War, the Government seized the station RAC 105. Finally, on January 26 of 1939, with the entry of Franco’s troops in Barcelona, ​​the station emitting at frequency modulation 105.0  was occupied by the victors and renamed as Radio Spain 2. RAC 105 happened to be controlled by the new regime and banned emissions in Catalan. On April 8 of 1941, the regime proceeded to liquidate it, and thus became corporation: Radio Spain Barcelona SA.

Shortly after the end of the dictatorship, in 1980, the Cooperative Society of Catalunya Ràdio Asociació reconstituted, with the aim of recovering the lost heritage. Finally, on December 23 of 1982 , the reconstituted autonomous government of Catalonia, the Generalitat, Radio Associació SCCL granted the concession to operate an FM station in Barcelona, ​​at the frequency of 105 MHz. Half a year later, in May 1983 Ràdio Associació SCCL reach an agreement with public broadcasting entity of Catalonia, the Catalan Corporation of Radio and Television , for it to manage the station, part of the group of stations in the Generalitat, as an alternative to the generalist station, Catalunya Radio. Thus was born RAC 105 (whose name refers to the acronym Ràdio Associació de Catalunya and the emission frequency), with a musical radio format, in Catalan.

After completing the operating agreement in 1998 Ràdio Associació SCCL has taken up frequency management and together with the company RadioCat the Godó Group, participates in the creation of the new project of private broadcasting in Catalonia, keeping supply and the RAC 105 radiofórmula creating a new programming project of general application with RAC 1. On January 25, 2010 RAC105 launched another subsidiary, a TV channel 105TV, which will be also called RAC105. So a more attractive platform will also get to face the demands of advertisers and advertising markets time. One of the main objectives is the mainstreaming of content between the two channels, radio and television, which will complement the network with the new website RAC105, besides being a musical reference in Catalonia oriented offer leisure and entertainment content. Currently receives subsidies from the Generalitat of Catalonia.

RAC 105 receives grants from the Generalitat of Catalonia. Besides music there are other pro0grams which offer news releases, daily reporting of the events, and performances by national and international artists. RAC 105 is avialable in FM and TDT formats but can also be have online on rac105.cat. Visitors can enjoy live content, podcasts, archives; read blogs; mark their opinions; know about events, new releases and much more. The twitter, facebook and Youtube platforms of social media are also available.