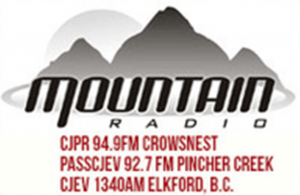 Mountain Radio 94.9 FM (CJPR-FM) Blairemore (in Crowsnest Pass) , Alberta is a Newcap Country Radio station that started broadcasting on AM Dial in 1972. Mountain remained on frequency 1490 AM until 2000 when it finally switched to FM. An addition was made after approval from CRTC on May 16, 2008 to install a transmitter facility in Pincher Creek at 92.7 FM with CJPV-FM as its call-sign. Lethbridge Broadcasting Ltd was the first licensee and owner of the Mountain Radio when it got the approval from CRTC to power the region with a transmitter of 1,000 watts in Blairmore on April 28, 1972.

Mountain signing on air in 1973 is a home to rich country music in the region of Crowsnest Pass and reserves a diverse range of information for the community. Audiences can listen to the Mountain Radio, the voice of southwest Alberta online through the official webcast and take a look at visual version of news, blogs, get weather updates, find multimedia items, photos, videos, concerts, community events, features and much more. Fans can visit the Mountain Radio on social media platforms of Twitter and Facebook. Here is official site: Mountain Radio 94.9 FM (CJPR)

Listen Mountain Radio 94.9 FM (CJPR) live in the urban community of Blairemore amidst rocky mountains owned by Alberta. Wait as the stream loads.

Mountain moved towards Elkford, BC and activated its rebroadcaster at 1340 kHz and 50 W. After a series of transfer of Class B Voting shares of Selkrik Communications Ltd from Southam Inc. and seven others shareholders the assets were now to Canada Trust Co. binding by a voting trust agreement. Now Southam had 20% and 28% of voting and non-voting shares while Selkirk Communications held the companies of Selkrirk Broadcasting Ltd, Calgary Television Ltd, Lethbridge Television Ltd and Niagara Television Ltd.   Maclean –Hunter in 1989 was introduced to the scene purchasing Selkirk Communications and thus a couple of channels (among CJEV Elkford BC and CJPR 94.9 FM Balirmore) were now under the name of Rogers Broadcasting Ltd.   In 1997 Nornet Broadcasting Ltd showed interest in purchase of local programming and country music channel and subsequently took it from Rogers Broadcasting on December 1. Skeena Group Ltd. on November 18, 1998 became the new owners of CJEV and CJPR 94.9 FM.   In April 2002 CRTC gave current authorities (Skeena Group Ltd.) to pass all of its shares to Telemedia Radio Inc of Telemedia Communications Inc. There came the shares of Okanagan which merged with Tele to form Okanagan before finally getting amalgamated in a merger between Canada Inc and Tele on September 1, 1999 to make on big Telemedia Radio.   A number of radios held by Tele were sold out to Standard Radio Inc which standard subsequently released to Rogers Broadcasting Ltd and Newcap Inc. subsidiary Canada Inc. CJPR 94.9 was now one of the 15 channels owned by Newcap.   CJPR‘s license got a renewal on May 28 with validation until August 31, 2016.