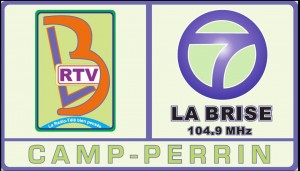 La Brise FM 104.9 Les Cayes Stéréo launched on March 20, 2004 also known as Radio Télé La Brise or RTLB is a station broadcasting Camp-Perrin, Haïti. The FM initially launched in Camp-Perrin region is currently spread to the entire Métropole Sud. Max Alain Louis an Electrical Engineer by profession with some good experience of more than a decade is the CEO of the La Brise. Radio TV La Brise is involved in promoting South of Haiti by local programs to discover artists, entrepreneurs and interviewing the political leadership form the region. The programs are broadcast on television and radio. It also broadcasts various productions from other radio and TV stations at national and international level by collaborating with other national and regional media houses. Aside from the various tests to assess the interest of the people for the channel, La Brise FM 104.9 (The Breeze) began broadcasting on 104.9 MHz officially in December 2007. You can listen to the news, find podcasts, know about regional happenings and have the opportunity to feast your ears with some of the best French music. The music offered by the 104.9 FM includes Kompa, Gospel, Pop Hip Hop, Kontradans Méringue, Cadenca, Rock and other regional and international music genres. Le Roi FM (The King) is the tagline of the La Brise Camp-Perrin. La Brise 104.9 FM is available on AudioNow, Ivoox, tunein and other popular streaming platforms. Fans can download the official Android and iPhone streaming apps form net and also visit the Radio TELE LA BRISE on Facebook, Twitter and Youtube to connect socially.