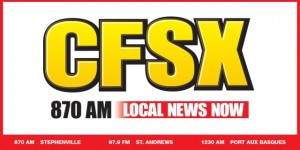 CFSX 870 AM Stephenville, first aired on November 13, 1964 is a News and Talk station owned by Newcap Broadcasting Inc. Upon launch it used an ERP of 500 watts and frequency of 910 kHz. The station would initially rebroadcast the content of the Corner Brook CFCB-AM. CFSX explains the Tagline “Coming from Stephenville”. Dr. Noel Murphy who died in March 2005 was the owner of the channel through Humber Valley Broadcasting Co. In March 1970 CRTC permitted the station to open its studios at 251 Oregon Avenue in Stephenville. Now the channel was something more than a simulcast facility though it rebroadcasted some of the CFCB programs however, a large share of its content was created locally by the local team staffed. Keith Pittman was the first station manager at CFSX. License of the CFSX with other transmitters got renewed in 1975. The station switched its frequency from 910 kHz to 870 kHz in January 1985. CRTC renewed the license of CFSX in May 2010 until August 31, 2016. You can listen to the station online with news, sports, weather updates, traffic reports, school information, music (Classic Hits) and all the cool stuff.  Fans may also follow the channel on Facebook and Twitter.  Here is the website: 870 AM Stephenville, NL

Listen 870 CFSX live from Stephenville, Newfoundland and Labrador. Wait as the stream gets loaded in the player fro you