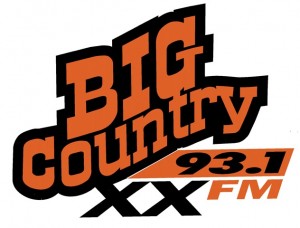 Big Country 93.1 is a Canadian Country format station that broadcasts from the region of Grande Prairie in Alberta. Jim Pattison Broadcast Group has the ownership to the Big music channel launched on December 16, 1979. The radio with call-sign CJXX came originally with the AM band on 1430 kHz. The audience served by the World Class Country is between the ages of 25 and 54. The community service programs and affluent market leading news has earned the channel Big 93.1  a valued repute and recognition in the Peace Country. The award such as Canadian Country Music Association station of the year and Western Association of Broadcasters Gold Medal Award are the proof of the good work. You can listen the Big Country 93.1 online and find more including regional and national news, contests (Win Big with Country 93.1 FM, Your Identity is Important, Mugshot Monday, Spin-To-Win, Nearly Impossible Question, Hot Rod Slang, Bombard Your Yard), events (The Mamma Mia Farewell Tour, 2016 Bear Creek Folk festival, Grande Prairie Street Performers Festival), Prairie equity scholarship and rest. Big Country 93.1 can be touched socially via Facebook and Twitter. Here is the website: Big Country 93.1

The C1 class was originally established by Pioneer Broadcasting Ltd in 1978. The first attempt (1978) of the licensee was in vain however, Pioneer was successful in its second attempt to get the permission of setting a full-time station on 1430 kHz with an ERP of 10,000 watts. Frank Valentini, a shareholder in the group was in office as the first General Manager of the CJXX. Central Alberta Broadcasting Ltd. on July 27, 1982 was granted the approval to acquire Pioneer Broadcasting Ltd. In 1985 the Alberta Broadcasting took the full control of CJXX. The ownership of the CJXX 93.1 FM once again changed when Monarch Broadcasting Ltd stepped up to acquire CJXX Grande Prairie and CKRD Red Deer. The frequency of the CJXX was changed from 1430 kHz to 840 kHz on February 15, 1991. The effective radiated power of the daytime was increased from 10,000 to 25,000 watts in 1995, however, wattage for the night remained unchanged. The year 1999 was marked with the approval of band change from 840 AM to 93.1 FM. On December 21, 2000 Jim Pattison Industries Ltd. received the approval to purchase a number of Monarch Broadcasting assets. The CRTC renewed the license of the Big Country 93.1 on November 30, 2010 validating it up to August 31, 2017.