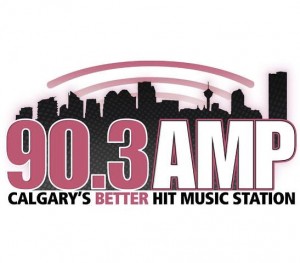 AMP Radio Calgary 90.3 FM launched on March 19, 2007, Calgary aka CKMP-FM is a Hit music station based in Calgary Alberta. The station was initially launched to spin alternative rock genre and named as Fuel 90.3 before switching to Contemporary Hit Radio format in year 2009. Newcap Broadcasting in August 2006 applied for license to transmit an adult album alternative channel in Calgary. AMP after some technical fuss got on-aired after the approval of CRTC. CFXL-FM is the sibling of the 90.3 AMP uncovering the slogan of Calgary’s Better Hit Music Station. On the first launch the program director Murray Brookshaw set the goals of the FM to be radar that promotes the classical and oldies as well as giving an even space to the contemporary hits and popular genres of time. The Calgary media faced some negative feedback owing to the controversies drawn after the breast implant contest and a competition: Bank it or Burn it  arranged for burning $5000.

However, according to estimates quoted by Radio Insight the audience share remained 4.5 in November, while Numeris, an independent source ranked CKMP-FM as 11th most listened in Calgary as per PPM data released. Audiences besides receiving the FM stream may listen to the radio online on the official site with a lot more to find including Concerts, contests (More Money Mashup) flames song, events, playlists/new songs (Top 40 & 20), recently played, android and iPhone apps. Fans can win a lot from the contents offered by the 90.3 and follow the CKMP on Facebook, Twitter, Instagram, Youtube, Pinterest and Soundcloud. Here is the official site: AMP Calgary