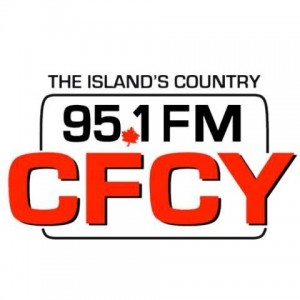 95.1 FM CFCY Charlottetown, Prince Edward Island officially launched in 1925 is a country format music station owned by Maritime Broadcasting System. The Island’s Country is the slogan of the 95.1 FM CFCY. The history of the 95.1 FM traces back to 1924 when Keith S. Rogers on experimental bases started 10AS on August 15. The 10AS was renamed as CFCY after Rogers successfully got a commercial radio license from the authorities (federal government). CFCY would operate on 960 kHz with an ERP of 50 watts. The power was incremented to 100 w in 1926. CFCY would operate on behalf of Island Radio Co., the new owner. Power increases to 250 watts in 1929 and then 500 watts in 1931 with a frequency flip to 580 kHz in the same year and then 630 kHz in 1933.

Note: Audiences have to download the VLC or Windows Media Player plugin to receive the stream because of the unusual format.

ERP got increased to 1,000 watts in 1935. Effective radiated power (day-time) advanced to 5,000 watts and CFCY became the first 5kW channel East of Toronto. Board of Governors decided to approve the Atlantic Broadcasting System in 1959 which consisted of CKCW, CHNS, CJCB, CFBC, CFCY and CFNB Moncton, Halifax, Sydney, Saint John, and Charlottetown respectively. The Trans-Canada and Dominion networks were evolved to a single whole: CBC radio service in 1962- CFCY was now a CBC affiliate station. The full-time ERP of 5,000 watts became 10,000 w in 1966. Eastern Broadcasting Co. came forward to acquire the 95.1 FM on July 8, 1971. FM 95.1 got separated from CBC in 1979; CBCT would now do the work previously done by CFCW. The Eastern Broadcasting sold out the 90% shares of the company and thus CFCY went into the share of Maritime Broadcasting Co. Ltd in December 1986. The two companies Maritime Broadcasting Co Ltd. and Eastern Broadcasting merged to form Maritime Broadcasting system Ltd. in 1988. The country music was borrowed as station’s new format from CHLQ-FM in 1991. The existing AM CFCY was converted into FM band broadcasting at 95.1 MHz with and ERP of 73,300 watts post the approval of CRTC in March 2006. FM would broadcast the country music, serving the listeners from ages 25 to 54. The average ERP was increased from 73,300 watts to 100,000 watts in July 2006. On September 1, 2006 CFCY switched from 630 AM to 95.1 FM. Listeners can have all the fun online with best Talk programs, events (Prince Edward Island International Shellfish Festival), contests ( 30 Seconds to Win!, Birthday Club, Team of the Week), playlists, community things (Yard Sales, The PEI Proud Movement, Lost and Found) and more. You may join the 95.1 FM on Facebook and Twitter. Here is the website: CFCY-FM 95.1 Charlottetown