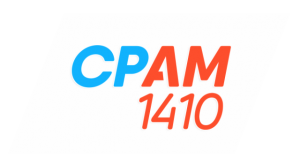 CPAM 1410 AM established in 2002 is a multilingual radio owned by Groupe Médias Pam Inc. and located in Montreal city. CRTC authorized CPAM Radio Union Inc. (owned by Jean Ernest Pierre) to set up a French language ethnic radio that would serve Francophone ethno cultural community of Haitian, African and Latin diaspora based in Montréal. Approved frequency and ERP was 1610 kHz and 1,000 w in 2001. CJWI 1610 hit the waves in 2002 from its studios at 3733, Jarry Est, 2e Etage, Montreal. Canadian Radio-television and Telecommunications Commission gave CPAM Radio Union green light to produce some programming in languages other than English and French i.e., third languages. Frequency was changed to 1410 kHz and Effective radiated power was increased to 10,000 watts in 2013. The programming targets these three cultural groups in the following proportions: Haitians (50%), Latin Americans (35%) and Africans with French as their first or second language (15%).

Full List of Quebec and Canadian FM, AM and Online Channels

Most of the ethno-cultural communities in Quebec are located in the immediate area of ​​the metropolitan area of ​​Montreal. These communities, which account for almost half of the population, are served only by two commercial radio stations, including CPAM Radio Union.com. It goes without saying that being the only French-language ethnic radio station in North America contributes greatly to the success of CPAM. Indeed, in record time, radio has entered the listening habits of Quebecers of origin because of its varied musical programming and very different from commercial radio stations. CPAM generously brings to its listeners Caribbean, Haitian, Latin American and African music. The spoken word content also differs. In reality, CPAM Radio processes information in a way that will first interest these Canadians from elsewhere. For example, radio has a strong focus on information on Africa, Latin America and the Caribbean. Audiences can listen CJWI-AM online with news, talk and music. Follow the CPAM 1410 AM (CJWI-AM) on Facebook and Twitter. Here is the website: www.cpam1410.com