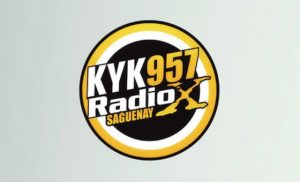 CKYK-FM-1 96.3 is a broadcast relay transmitter of KYK 95,7 Saguenay Radio X approved by CRTC on Aug 14, 1994; proposed frequency and ERP was 99.1 MHz and 7.9 w. A repeater requested at Jonquière that would affect the existing stations in the area was denied by the commission. Radio Nord Communications became the new owner in 2004. The satellite was not active until after April 2008 when CRTC allowed the 43-watt transmitter to sign on air. By 2009 the channel was operating on dial 96.3 MHz. In the same year (2009) the format was switched form Adult Contemporary to Alternate Rock. Canadian Radio-television and Telecommunications Commission on May 28, 2010 for a six year term until Aug 31, 2016. French Alternative Rock can be listened online with concours, animateurs info, Émissions, Événements and more. Follow CKYK-FM-1 96.3 on Facebook and Twitter. Here is the website: www.kykradiox.com