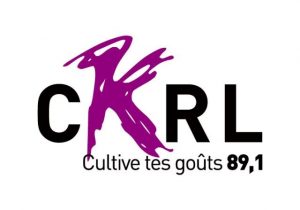 CKRL 89, 1 launched on Feb 15, 1973 is a Quebec City Class A community radio owned by CKRL FM Inc. Jacques Bégin is the president of CKRL 89.1 FM. CRTC granted Jean-Marc Chouinard on behalf of a company to be incorporated an FM license on June 14, 1972. Frequency and transmitter power for the station would be 89.1 MHz and 1,400 w respectively. The channel singed on air on Feb 15, 1973 as a campus radio for the Université Laval before shutting down in 1984; the university replaced the station by launching CHYZ-FM in 1997. Owner, Campus Laval FM Inc. received approval to increase ERP to 1,430 w in Dec 1978. Ownership was renamed as CKRL-MF 89.1 inc. in 1996. Wattage was once again increased to 1,495 w after a yes by commission in Nov 2006. The transmitter of the not-for-profit radio is installed at Edifice Marie-Guyart located in downtown Quebec City.  35th anniversary of the CKRL 89,1 FM was celebrated in Jan 2009 at Théâtre Petit Champlain. It became the recipient of the Community Radio Award in April 2011; ADISQ Awards were previously won by CKRL-FM in 2001 and 2003. Cultive tes goûts was and is the catchphrase adopted in Sep 2012.

CKRL-FM 89.1 bagged ASDIQ award for the fourth time in April 2014 and second and third time in row in April 2015 and Nov 2016. In Sep 2016, CKRL started focusing on local news with the hiring of Journalists and additional staff for the public and current affairs programs. CKRL 89,1 FM vows to participate in the development of Québec culture through an original and dynamic conception of FM radio. CKRL’s work is distinguished by the content of the programming, radio research, the training offered to producers and its relations with the Quebec City community. Audiences can have their favorite community radio online with Programmation info, best spoken word programs, Émissions, Nouvelles, Actualités, Palmarès, music and more. Follow the CKRL-FM on Facebook, Twitter, Flickr, Instagram and SoundCloud. Here is the website: www.ckrl.qc.ca