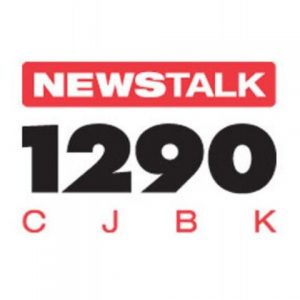 Listen CJBK 1290 AM London, ON Online

Listen Newstalk 1290 CJBK online from 1290 AM London, Ontario. Wait as the stream loads.

In 1983 second highest audience share was recorded by CJBK as per BBM ratings. The format became light rock in Aug 1987 just to become oldies in 1992. News and Talk was the new formatting effective Aug 12, 1996. Telemedia Radio Inc. came forward to purchase the siblings in 1998. In 2002 Standard Radio Inc. purchased the CJBK-AM from Telemedia and sold it to Astral Media Radio G.P. in Sep 2007. Astral and Bell Media were consolidated into one company and CJBK 1290 became an asset of Bell Media. CTV London studios and newsroom broadcast the news bulletins for the radio after CJBK was acquired by Bell in 2014. In July 2016 London Knights ended their 22-year relation with the CJBK 1290 AM as they shift to Corus-owned AM 980. With the announcement coming from Knights, the same day Mike Stubbs also announced his retirement from the radio as host of Morning drive show and Knights man. News, live sports commentaries, talk shows, interviews, music and wide variety of content is aired by CBJK 1290. Official site has for audiences, shows info, contests (OLG Jackpot Radio), audios & videos, community events, podcasts and more. Get social using Facebook, Twitter and Instagram. Here is the website: www. iheartradio.ca/newstalk-1290-cjbk