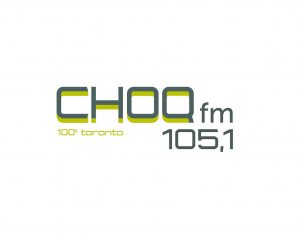 Choq-FM 105.1 launched on May 1, 2006 is a Francophone community station owned by Cooperative Radio-Toronto. La radio des francophones de Toronto and 100% Toronto are the slogans of the CHOQ-FM. CRTC authorized La Coopérative radiophonique de Toronto inc. (the company was incorporated on July 5 later in the year) on June 14, 1991 to establish a French language FM in Toronto that would use a frequency of 99.1 MHz and would be powered by 31 w transmitter. An application by the group to build another FM radio was deferred by the commission in June 2000. However, the CRTC approved a French language FM in the city on April 17, 2003; the new channel would use a frequency of 105.1 MHz using and would broadcast 105 hours/week and around 89 of them would be filled with locally produced content. 16 hours of programming would be borrowed from Réseau Francophone d’Amérique and Radio France International. The launch was extended to Nov 2005 in the February after the approval of CRTC. On Nov 7, 2005 the channel started testing its broadcasts but couldn’t launch officially until May 1, 2006 from its studios at 425 Adelaide St. W. The commission renewed the license of the CHOQ-FM on March 28, 2013 until Aug 31, 2019. The wattage was decremented and incremented to 188 w (avg.) and 1500 (w) respectively in July 2013 after the request of licensee.

Like the City of Toronto, CHOQ-FM 105,1 stands out for its dynamism, flexibility and professionalism. On air since May 2006, CHOQ-FM is composed of a young, dedicated and committed team with Toronto Francophones and Francophiles. The Toronto market is a great opportunity for businesses and Francophone or bilingual organizations to advertise their products and services. CHOQ-FM 105,1 offers direct and effective visibility to a francophone and francophile community.Francophone pop/dance music and contemporary charts, magazine and info programs and a little overnight English programing makes the content. Audiences can access Horaire, (schedule) Émissions, music news and more online. Follow the CHOQ-FM 105.1 on Facebook, Twitter, and YouTube. Here is the website: www.choqfm.ca