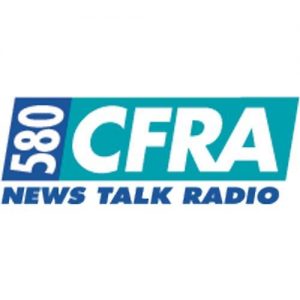 Listen 580 CFRA AM Ottawa, ON Online

The music format was changed from AC to lite rock in 1986 and then moved to fulltime Oldies in 1991. Meanwhile in 1992, the sibling CFMO’s calls were changed to CKKI-FM. 580 CFRA already and being the first one to broadcast in real time in 1995 was streaming as an online radio in 1996. After purchasing the Rawlco’s Ottawa division, the sports programming was transferred to CFGO, making the channel ad full time New and talk radio. CHUM Ltd. amalgamated with Bell Globemedia in 2006 to form CTV globemedia. In Aug 2013 the nighttime ERP was incremented to 30,000 w. The premier news and talk radio in Ottawa market celebrated its 70th birthday on May 3, 2017. Audiences can listen the CTV radio online with national and international news, weather updates, Ottawa’s news, current affairs and business talk, contests, (Win big with News Talk 580 CFRA, OLG Daily Grand Lotto, $1,000 Minute, OLG Lotto 6/49 Giveaways) events info and more. Follow the CFRA 580 AM on Facebook, Twitter, and Instagram. Here is the website: www.iheartradio/580-cfra